Last blog for the year, and a bit of catching up to do. THE TASMANIA TRIP happened in the first week of July which I know is a long time past but you know, what’s time but a crazy human construct reflecting a need to fragment the whole, to move back and forth rather than to stay still in the now. Mmmm, my conflictual relationship with time, maybe I’ll write about this one day. And this trip was an important one for me as a writer because I had a conversation with Paige Turner at Fullers Bookshop in Hobart. I was born in Hobart and Fullers was the first bookshop I went into, probably where my first book was bought. And two school friends, Janet and Bron, flew down from Canberra for the occasion. We were best friends in high school. This is a photo of the three of us. 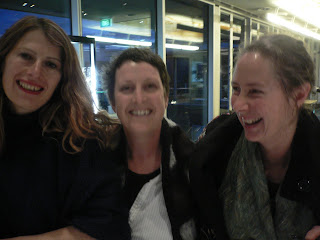 They still haven’t read In-human, which I find intriguing seeing’s we were friends when we were the same age as the main characters. Aren’t they curious about whether they turned up in the story? I think reading a horror novel for someone who doesn’t read horror is a hard thing to do. When I tell people I write horror often the first response is I don’t read horror. The book is dismissed straight away, and this decision’s been made without ever actually having read any horror. Robin, another school friend, asked at the Fullers’ event why I called what I wrote horror. She had read In-human, picking it up as a fifty cent bargain at a garage sale before the book’d even got into bookshops! I read an e-mail from her the day of the launch saying how much she liked it. On the night she suggested that I shouldn’t label it horror.

I think what she was getting at was that I was losing an audience because people would come at it with preconceptions, and this would stop them from even considering reading the book. And it does. Horror is not serious literature. There’s something, well, wrong with it, both writing and reading it. The dark side remains hidden for a reason…It is a good idea, always, I reckon to read a book without assumptions or prejudice, to let the story be told for the first time and, in a way, to learn how to read all over again. Some books demand this, and they make my heart sing when they do. Novel means new and I take this seriously as a writer – the task is always about doing something new. And at the same time being true to the story. The mix is heady.

So the day I flew in I checked out some bookshops and the three I went into each had a stack of In-humans, all facing out. At eye level. As a writer I’d just thought about getting published. I did not think beyond this to reviews and festival invites, shelf placement and stock levels; the path to getting read is ridiculously treacherous. Lots of little decisions being made that can mean few ever even get to be aware of the book’s existence. But there’s something about reading a story set in your own landscape. Here’s a photo of me in front of Fullers Bookshop, and if you look carefully... 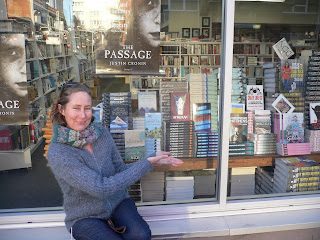 I also discovered the best horror collection in any bookshop I’ve been to. Richard Sprent has done an amazing job at Ellison Hawker in Liverpool Street. I spent a fair bit of time and money there. He is passionate about horror. His wife actually wrote a review of In-human for The Mercury. He’s a horror fan and she doesn’t like it, prefers someone like Tim Winton. We shook our heads at this. Her review is one of my favourites even though the dislike came across. It was funny and strange in its style. One of the problems with In-human, according to A Forward, was that it was written in a first person style that was disconcerting, and this whole review was written in third person, as if to make a point. And reading In-human made her feel sick. Woozy.

To physically affect someone with words is something I think horror can really enable. It can push you to a point where you just can’t sit still. Horror movies do the same. Your brain is bypassed; there’s just body and emotion. This has been pretty well my whole experience with writing my current novel. I can’t sit still. I’m up and about continually, and when I am sitting writing the laptop is to my side. I don’t look at it full on; darkness can be hard to face. Imagine watching a horror movie, squirming on the couch, making a cup of tea, yelling out; that’s how I’ve been writing this year. It’s not how I wrote the last book. I’ve been told In-human is confronting, and I kinda get this even though I don't really feel it myself, but what I’m writing now is confronting for me. I’ve been meaning to post some reviews but until this happens you can read Anna Forwards’ and some other ones at Transit Lounge website.

So, the conversation was set to start at 6pm and at 6pm there was just me and Paige and Bron and Janet. We waited fifteen minutes for another friend to arrive and in the meantime maybe twenty turned up. Phew. It went well. Paige asked thoughtful questions and I got to read from my new novel, which I love doing. I love the voice of my current narrator and reading from In-human has actually been difficult to do because of this. A few people in the audience asked questions and then I did some signing. Paige hosts a radio show about books on Edge Radio, Tuesday nights, and also has a book blog. Both are worth checking out.

The next day my friends shouted me to Moorilla Estate for lunch. This was exceptionally nice eating, and the service was good too. A view of the Derwent, Chigwell. Sadly the art collection, which focuses on death and sex, is not opening till January next year. There was some major building construction going on to house it. Another trip. We stayed six hours, drank a lot of Moorilla wine. And I am not a wine drinker. Here’s a photo of me finishing off a glass. 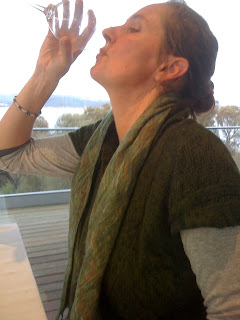 Janet’s brother came picked us up. We got home and then it was such a beautiful night out me and Janet walked up to the milkbar, took some travellers. Ended up buying a packet of tobacco and climbing over the fence to the park opposite. Sat drinking beer and smoking like we were teenagers. Stayed up till three in the morning talking. Like time didn’t exist.

I love Tasmania. We drove down south to the Hartz mountains and then to Hastings Caves, ended up at the thermal baths just on closing time. Who would bring togs on such a cold winter’s day? So the park ranger closed up the gate and let us go skinny dipping. It was the best swim I’ve had since Apollo Bay last year. Here’s a photo of me in the pool. 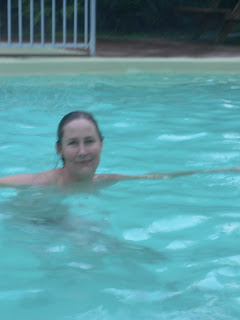 And then the day before we left we went up the top of the mountain to muck round in the snow. This is a photo of me and Janet’s daughter Ellen having a good time. 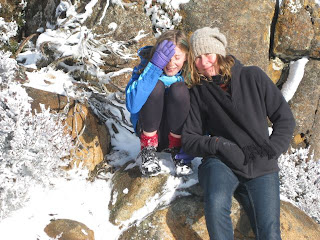 Tasmania, land of extremes hey? We both ended up going on a boat later, out on the Derwent because there’d been a whale sighted. A Southern Right Whale, right up near the jetties. Sadly we didn’t get to see it but we did see a lot of other wildlife. A White-breasted Eagle that had to now be called a White-bellied Eagle, which got us talking about how Fairy Penguins had to now be called Little Penguins. It’s true, all the signs are being changed because the use of the word fairy is offensive to some. And so, apparently, is breast. This is what I was told.

And that was my holiday in Tasmania. That was my first author’s tour. Now you know all about it.