How much the human body contains - excerpt 3

To look up is the biggest drug of all; to contemplate the cosmological patterns and see them simply as an expression of within, to see the energy we are made of and how recklessly it breathes. When he kissed me it was on. We were on top of the world, balanced on a wooden fortress in the grounds of Mount Carmel primary school, down Sandy Bay road looking out to the sea, with a slide and a rope ladder as the only two sure means of escape, the stars up above a possible third option. He kissed me and pushed me back and I put my hand on his face and he put his under my bum and I lifted up into a kiss that became eternal, like everything is but we just don’t choose to remember it as such, and when I put my hand on his cock it was not that big and he lost his breath until I poured more into him, opened up and surrounded him.

It happened before I even knew what I was, and before I did it scared the fuck out of me. I behaved in a way that was definitely unusual, one I had not imagined or foreseen. It was of some other body. We were both of a different body. The hardness and hairiness of dog.

We got all our clothes off; some of them fell to the ground. If you enter someone you leave something of yourself inside. It happened with a self I didn’t recognize yet. The whole sky collapsed. A big heavy weight fell and split open into water upon us and now cold ice was beginning to form as he collected our clothes. The clouds came and went.

Back in my single metal bed he examined me carefully. Every light in the house was on. Then he walked naked to turn them all off and when he pinched me I folded in two. If life depends on this let it depend on this. He took his wet body off mine; the sheets were stained and mud was everywhere. The imprint of everything we did, where each of his fingers had touched me and where mine had gone too, showed up on the sheets. I tried to fold them up.

If this could have gone on forever it would have, maybe it still is. So we smoked another joint and his body changed and so did mine. Visibly this time. I opened my eyes and saw a monster. I ran down under the house because I wanted to hide. That’s when I saw the dress. The moon was seriously low in the sky, right up in the middle of the doorway leading to the woodpile and all the junk collected for over one hundred years, an obvious world out there, and out of breath I put it on. It fitted perfectly, my breasts half spilling out and I collected the axe and would have used it then and there but instead I held his neck so his mouth would not leave. If I’d stopped kissing him and had opened my eyes I would have killed him, maybe. Had to kill some one that night because that’s what I felt like doing. I could have cut his throat, no doubt about it. There was still time.

It was three o’clock in the morning and Nicky and Cliff were back. Richard had joined them for a cup of tea in the lounge room. Somehow he’d gotten himself clean, must’ve rooted around Rod’s clothes, a black suit and white shirt, forgotten the cuff links and washed his face in dew. I came in wet and dirty and no one seemed to notice. Except Cliff. He looked at me and smiled, like I’d opened up my cleavage, smeared myself with mud and put on a red dress especially for him.

I sat down in front of them with the axe between my knees. I was a little confused but absolutely certain of what was going to happen next.

I sat on the yellow bentwood chair in front of the three of them. I understood totally everything. I thought I did.

It happened in an instant and so was quite difficult to evaluate. Nic explained the ears to them and they didn’t show that much interest.

The axe was sharp and every part of my body was visible.

How much the human body contains - excerpt 2 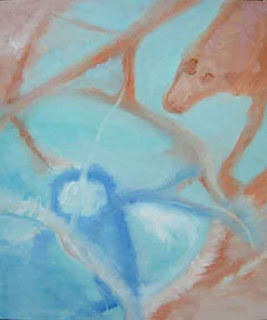 So, I chose to see everything that was there, hairy Rick with his bum up high and his face inside my sister’s skirt, the snake hissing into the heavens, turning the stars around with its breath, and then lying squirming across Chris’s two opened palms as he stood there stretched and majestic above us. This animal was a fat and solid thing that after falling down either side of Chris’s hands entwined around his bare belly and then slipped into the darkness behind.

I saw neither end. For all I knew there was no end. And in the middle of it it appeared to contain a life more than its own. I saw the imprint of a little hand, then two of them pushing against its pulsating skin. When I looked again there were a dozen or so appendages moving like they wanted to get out. I was intrigued and looked to the stars for an answer.

And the lead singer’s voice was truly angelic. Even Nicky and Rick had stopped what they were doing and were now sat at his feet in rapture. Their eyes were raised to heaven like mine but it was hell that opened up and it did so with a groan that could not have originated from any place else except a fathomless darkness. I felt it in each part of my body, I felt it as a terrible whole, and at that moment understood perfectly what was going on.

I saw the pit that surrounds us, the great height of its perturbing walls and the stars a vague illumination from above. The moon though not yet physically present in this opening was startlingly close, just a breath away from the edge, the hairy lip of the outermost region of hell, and it was upon perceiving this edge between the two, heaven and hell, that made me think I might’ve been at Bevin’s side this cold and horrendous night if I had so chosen. But with that realization I did not dwell on him. I did not think of love. I was not fearful; there truly isn’t a devil great enough and Chris was the devil in that particular moment of time only and he knew it as much as we all did. I mean, we all get our turn.

So it turned out that it wasn’t the fur that gave me my entry into hell, right from the start me and Sally have been in agreement on that point, the dog days have always been much better; and the devil and I, we silently made a pact that even though it brought terrible consequences, I have never been regretful of. You could say it was my making.

And the gut churning, demonic groan had come from the snake as its tender, puce coloured underside had been slit by god knows what but it looked like a kiss so it must have been his teeth and immediately it had opened up and spewed all that it contained, a filthy mess of bodies each in its own separate bloody sack, upon the black earth in front of us and in the light of the moon we watched those bodies squirm and grovel into a human life.

For the moon had now come over the edge, breaking open the darkness, and the sight was unbelievable. This was when Rick high tailed it, tried to drag me along with him first, his mouth around my wrist, but when he met with my resistance he spun on his hind legs and ran. I watched him fly upward and penetrate the moon, watched him run naked into the light, and then saw his massive jaw opening into a howl that let out every grief he could have possibly experienced.

And still my body refused to become wolf even though my first instinct was to lick the blood, all those birthing sacks, off of their flesh, if indeed it was flesh. They looked human but who could really tell. And then one of those little hands grabbed onto Nicky’s ankle, like wrapped itself around as if it was a piece of thick and soggy rope. The fingers seemed all joined together now they’d exited the womb. Were they hands or tentacles? They seemed to shift between the two. She screamed and kicked at it, with her other foot she did this. Another one attached and like Rick had done for me, I tried to drag her away.

Christ Chris get them the fuck off me, and he smiled like the two of us were playing a kid’s game. Then he took his lighter out of his jeans and flicked it up close to her ankle. How can something so simple work but it did and the tentacles shrunk back like a leech from the light or the heat, I’m not sure which, but it smelt like burning flesh. She got behind me and rubbed where the slimy thing had been, a red raw rash already appearing, and it never really left her. Like the poison had gotten inside her bloodstream.

She couldn’t talk properly after that anymore, and everyone put it down to too many drugs. For Clifford specifically it was that fucking chemical, who the fuck knows what crap goes into it. And though Chris was totally remorseful he still refused to be her boyfriend. That’s how things go. The first circle of hell had been entered.

Posted by clinton at 9:45 PM No comments: