My dog Eddie died at the start of April this year. She came lived with me when she was three weeks old. The runt of the pack and given away. I wrote some poems about her year before last and have been wanting to put them here for ages but it’s been hard doing much. I’ve been very sad, got unwell. Now I’m packing up and leaving Melbourne, going back to Tasmania to live. I got some land in the Midlands, a house with a Sugar Loaf behind it. I’ve got another kelpie called Ruthie. She’s a red and tan, Eds was a red cloud.

Here's a painting I did of Eds a long time ago, before she got grey. 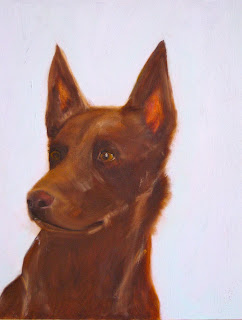 I’ve heard that the American Indians always have one or two ghostdogs accompanying them till they die, then after this their dog can pass on too. The pack stays complete regardless of death. So I know Eds is coming with us. She’s gunna like the farm….
HERE'S RUTHIE ROUGE 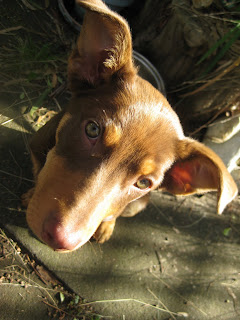 These first poems are about Leroy too (he’s the one with the dirty teeth), and me pretending to be a dog.
I am a dog 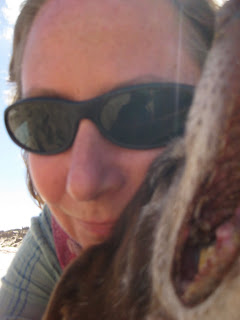 snap
He took a photo of me
when I was sitting
on the floor, eating a chop.
I showed him my teeth.

(I)
If I pull open your mouth
I can see how dirty your
teeth are -
your tongue is pink and
sweet and sometimes
you can walk so close
I lose you.

(II)
When I put my teeth into his neck
I started to shake him so all inside
was broken. The only noise
he made was at the start, a quiet
gurgling. There was no blood spilt.
I dropped him to the concrete
and while he huddled up into a ball
I ran off, doing the opposite -
flinging every limb out. Even
my tongue was free.

(III)
His jaw opens up with a howl,
so big it can no longer fit in.
A foul, hot breath exits
through sharp teeth that
could cut through any skin.

This one’s about me, Leroy and Eddie. I’m gunna miss walking along Altona back beach with them. You wouldn’t know you were in a city full of millions of people – just me and the dogs and a stack of seabirds, huge smoke stacks pumping out fire every so often. Orange against blue. We’d walk all the way to Williamstown without meeting anyone, often wading because the beach is tidal. One evening it got dark unexpectantly, must’ve been end of daylight savings or just the days suddenly getting short, me losing track of time, and I was waist deep. Eddie kept heading off into the blurr of sea and sky, I’d have to keep yelling her back, and Leroy paddling furiously with his little legs, no place to rest. He was well over his head. I was frightened for us all. But we made it home safe.
Altona back beach
Monstrous seabirds,
huge flocks of them
rising up against smoke
stacks. All three of us run.

This is a photo of Leroy and Eddie down Point Lonsdale. We would sometimes do a day trip there. Eddie loved playing with a stick. Leroy couldn't care less. 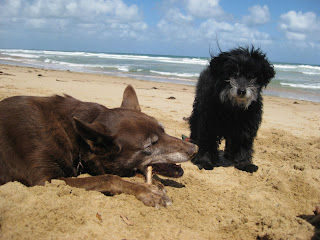 The last couple of years before Eddie died she started having fits. These terrified and upset me. Towards the end I got used to them, had worked out how to handle them. I always knew when they would happen, woke the moment before if we were asleep. The pack is inextricably linked. There was one night right at the end where after the fit the whole world became peaceful, inside and out. I'd never felt such a thing. All was ok with the world, all soft and settled. A gentle space had opened up. An enormous, infinite space. There was room for everything. Nothing jostled. I'd been reading One Flew Over the Cuckoo's Nest and in here it said that this is what Electric Shock treatment's meant to do, replicate the peacefulness experienced after a fit. How I've come to understand it at this moment is that it was surrender - fear'd been let go of and all that was left was love.
But I still start when Ruthie drops to the floor suddenly.

(IV)
Her hindlegs falter
and she falls to
the ground, my
heart goes with her.

In my dream, my dog’s dead -
she’s running muscular and wet
into the night and I follow.
She opens her jaw,
shows gum and teeth,
then rolls onto her back.
Shit pours out. She’s dead
and I don’t know what to do.

Cat and Dog
Black cat gets onto her blanket,
Starts rolling around and purring.
She likes the stink of it, of dog piss,
and when my old dog – the one
who did the pissing – joins her
she goes and lashes out,
hits old dog across the nose
with her paw, sends her cower-
ing behind my knees, head bent
so low it almost touches the floor.
Once she could’ve sent that cat
to HELL! Now she whimpers and
closes her eyes –
there are some things that are
hard to see, and this is one of them.
Posted by anna dusk at 1:28 PM

Beautiful poems, Anna. Some of the formatting has gone a bit funny on the blog post, but it came across fine on my RSS reader.

We are going to miss you!

Hey Clinton - only just saw this! Been a bit busy can I tell you....I'm missing you and Jen and Morrigan very much but I am making new friends, some animal. Life is good in the country. It's slow, which suits my nature, the art I do. I'm painting and writing and still unpacking.

The poems I wrote in 2010 owe everything to my poetry class, an amazing group of poets. I think I will blog about this, about collaboration on an unconscious level. This is how I write and paint always. I'm never alone, just sometimes the OTHER is a little bit more knowable.